I firmly believe all children are born feral. It is only through parental guidance, God’s love, and the village of highly tolerant people surrounding you, that they become contributing members of society and non-axe murders. But return them to their natural state (be it a sense of freedom or immersing them back into the  wild) and they revert to being feral as if they’d never met you.

Case in point, my friend owns one of those  inflatable places with the bouncy castles and squishy slides. The kind parents use to host their kid’s birthday parties so that they don’t have to clean their own houses, or risk other kids breaking their stuff. Anyway, our young ‘ens got gift cards for Christmas one year, and we were going often enough that my husband started referring to it as Feral Children Fun Land. It doesn’t matter how well-behaved your child is at home, or how quickly they listen and obey in your domain, once they walk through those bright, intoxicating walls, the anarchy section of their brain takes over and a wild spirit courses through their veins. It’s a perfect storm of the spastic energy wafting  through the air, the motors to the inflatable over powering your voice, and multiple places for your spawn to scamper where they are out out reach and control. They go wild. They revert to running in a pack, with the tallest and bossiest child leading, and all the rest following after blindly, screaming their call of the wild the whole way. I see why the staff work in 2 hour chunks.

Today Manchild and I went on a lovely outdoor adventure, hiking! As is true with both my children, about a nano-second after he got in the woods he had to pee. I think their bladders feel a subconscious need to mark their freedom. Repeatedly. Happens with Girlchild as well, as ferality is not gender specific. After marking his spot and getting that out of the way (yes, he did go before leaving the house – doesn’t matter), we continue down the path. Manchild chatters happily about what he sees around him, then makes a profound statement to test it for truth,  “I can throw up wherever I want to out here!” “Yup, you sure can buddy”, I assure him. He is pleased, and quieted by the sheer magic of this new thought.

We arrive at the water’s edge where he must test each rock, stick, and leaf for its sinkability. When he had run out of things to blindly throw, as expected, he tells me he has to poop. Of course you do, Lord of the Flies. I allow him to proceed behind a tree (options are limited), and afterwards he looks for other animal droppings. He needs to know who has been in this new-found territory of his, incase he must defend against them. So far, only goose poop. He finds this disappointing and acceptable.

Finally I knew if we didn’t leave soon, the rest of the day’s errands would not get done. Manchild my Domesticated Son would not leave his wild kingdom. However, once I put Manchild the Leader of the Wilderness Expedition in charge and requested he lead us back to the car (promising as many rest stops as he liked), we were on our way. For about 3 steps. Before he sat on a log to catch his breath and take in the sights. Back in the saddle again, we wandered about ten more steps before he declared himself tired and lay perpendicularly across the trail. Not the fearless leader I was hoping for. I encouraged him to get a move on by taking over his coveted title, and not only did he get a spring in his step, but he actually looked back at me, curled his index finger a couple of times in my direction, and  whistled for me to catch up. Apparently somewhere amongst this rugged landscape one mile from the mall, Manchild had transitioned from Leader of the Trail to Master of All Who Enter Here – at least in his own mind.

We made the trek back to the car with about 5 more rest stops and lots of walking slooooowly behind the dawdling Leader. He alternated between re-adjusting his hind end/mesh shorts situation, and holding my nice clean hand. Remember he had pooped in the woods? Did you know he declared today Undie-free Friday? Wearing the mesh shorts was just a bonus gift. We sanitized like champions once we reached the car. I strapped him into his car seat and he reverted back to the domesticated, moderately groomed, toilet proficient, small man I had left the house with today. The Wild Child within had not left him, but had merely quieted down until the next opportunity to fiercely rise and over-power my better judgement. 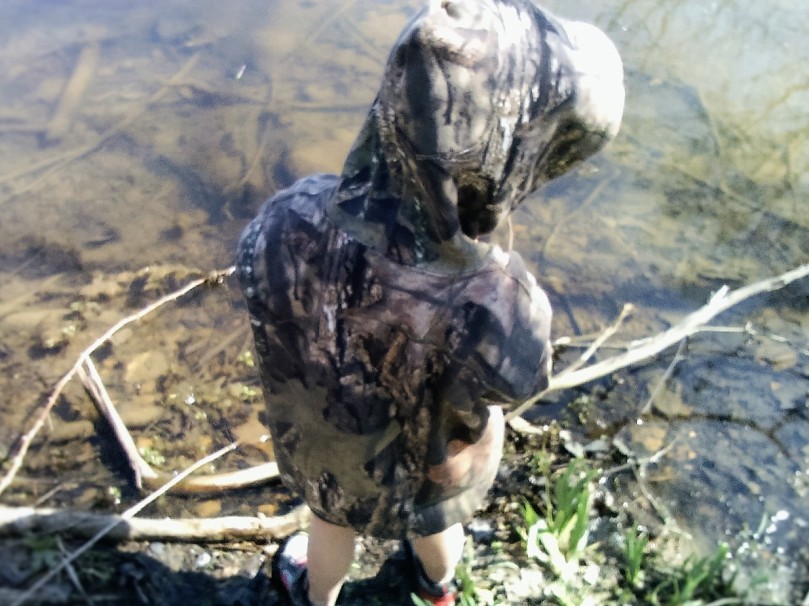