“MANCHILD”, yelled Girlchild (except she was using his real name). “YOU DON’T SHOOT YOUR OWN DOG!”Apparently Manchild was on an imaginary hunting expedition, and he was doing it wrong. Girlchild has always felt a personal need to correct such short-comings, and Manchild often gets the brunt of it. Truth be told, not shooting your own dog does kinda sound like the first rule of hunting.

It’s always amazed me how kids decide to play a made up game, and suddenly everyone knows the rules and roles. No explanation needed past a 30 second role assignment. And should things go awry, there are subtle hints from the Team Leader, that notify you of your job. Like today, when the Schenaniganlets were playing House in the backyard. Girlchild had gone shopping in my kitchen and came out with a purse bulging full of 2 lollipops and a bag of baby carrots.

“Husband, may you pick me up?” She called politely across the yard to Manchild, who owned the only Power Wheels in the yard, and thus had all the horsepower.

Manchild missed his cue, and only silence greeted her.

“I don’t feel like walking.” Girlchild hinted from the deck, at her all too realistically distracted ‘husband.’

“You can say ‘As you wish,'” Girlchild was now ordering Manchild as to his appropriate husbandly response.

He must have gotten that cue, as somehow Girlchild got a lift from the deck to the playhouse that didn’t include hitchhiking with truckers.  I assume the Power Wheels Gator was involved, but only the Lord knows what really transpired there.

But think about it. Wouldn’t it be nice if someone simply explained your role, lines, and cue to you? For example, after college, you will be a nurse. Don’t worry about being single too long, because your next role is as a momentary newlywed, with a quick  transition into motherhood. From there you will swing wildly back and forth from wanting to have friends over because you miss people, to having a house so shamefully disgusting that you are certain no one would ever want to spend time with you in it. Who can you trust to reveal a house that dirty to? Wouldn’t it be great if Motherhood failed to bring along her ankle biting dachshund, Shame, and instead only arrived with her BFF Extra Friendship in tow? But I digress…

However, it would be awesome if you knew your line in the next conflict scene, and could  deliver the precisely correct response to say what you really wanted.  Instead of forgetting your lines, and recalling 3 hours after the curtains closed, what you would have loved to have said. What a sweet change of pace that would be.

And lets not even talk about what the audience is hearing. Manchild informed me this week that he never wants a wife. When I asked him why, he squirmed, and admitted that wives always tell husbands that they are naughty, and say “Aw, man!” in a disappointed tone.

I was surprised by this tidbit, as I thought I was a fairly encouraging person. But then, you’d think after 6 years of parenting I’d have learned to take the statements of a 4-year-old with a grain of salt. After all, he did tell me last month he wasn’t having kids because he didn’t want to have to drive them to preschool.

So if I fail to volunteer enough, or don’t host enough social engagements, or over/under-parent in public places, please assume the best. Assume that I misplaced my script that each of us secretly believes everyone else has been given. Because everyone else seems to be doing the game right, and some days I feel like I’m just shooting my own dog! 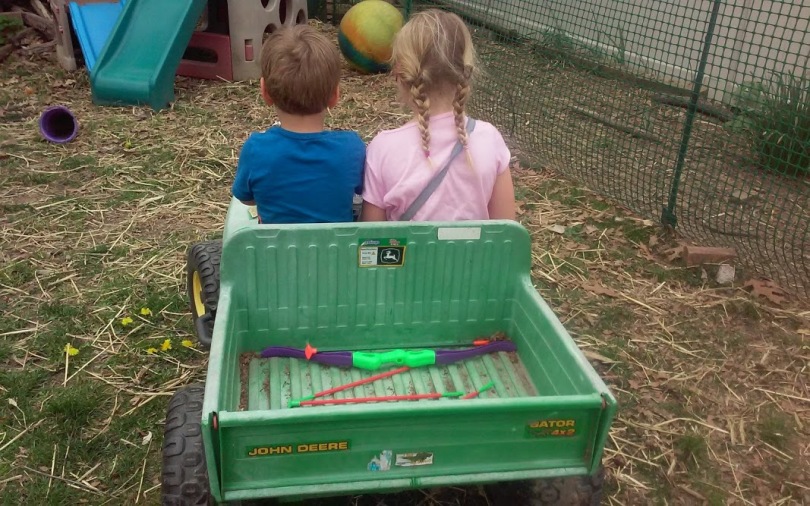