So, Girlchild has inherited my love of horses, and went to Kindergarten as a cowgirl on Career Day. I could not have been prouder of her for coming up with this beautiful idea on her own, and of myself for completely not backstage mommy-ing her or steering her in any direction. The decision was hers alone. I just happen to love her more as a result of it (kidding)! 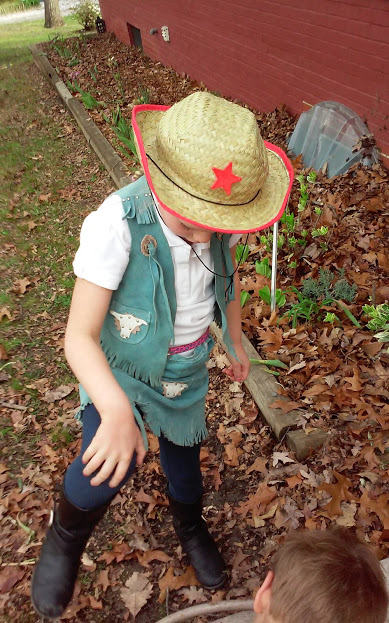 After listening to Girlchild attempt to sweet talk her dad into a horse in the backyard of our .22 acre plot for over a year, I had mercy on her and signed her up for riding lessons this summer. Then I realized that I’d have Manchild in tow, and I signed him up, too. He tends to destroy stuff when he gets bored.

Now, Manchild is more of a tough trucks and Ninja Turtles kind of boy. He has little to no interest in horses, so I second guessed my decision about lessons. I didn’t want his feeling to be hurt by leaving him out of the fun and making him just watch his sister in the ring every Wednesday morning. Nor did I want to waste money on a situation he had no desire to be a part of.

“Manchild, do you really want to take horse back riding lessons?” I asked him last week.

“No”, he said matter-of-factly, “I want to take cow riding lessons.”

<Crickets while my mom mind spins trying to make this work>

“Um, there actually isn’t anywhere to take cow riding lessons, buddy.” I say distractedly while still trying to work this into something feasible. The boy does love cows.

“Why?” He asks innocently.

“Well, people don’t really ride cows”. I explain hesitantly. Thinking back about all the  American settlers that rode on oxen when the need arose. Sometimes stupid exceptions mentally ruin my point.

The truth is, I’ve ridden a cow. With at least one of my brothers and a cousin. I felt like a liar telling Manchild that no one rides cows. My cousins lived on a dairy farm in  central Pennsylvania and they had one particular cow that was either super-tame or lost a bet. Somehow she got voted most rideable and we all piled on. Now the problem with dairy cows, as opposed to horses, is that their spine sticks up well above their boney ribs, with no muscle or fat to offer any padding. As in, between your booty bones. Not an appealing situation. But, riding any animal was better than none when you don’t get to grow up on a farm at all, so off we went.

In relaying Manchild’s humorous request for cow riding lessons to Captain Schenanigans later, Girlchild’s eyes got wide as she evesdropped.

“Mom, he can’t take cow riding lessons! You said those are dangerous and that no one should ride cows”. Girlchild is getting frantic. I realize she is thinking about bull riding.  In Baltimore. For a 4-year-old. Good grief, where does she get these notions.

“No, no, he’s not going to learn to ride bulls”, I reassure her. Besides, at this age, mutton busting would be more appropriate, I think to myself. I wondered for a second if there was anyone… no, I will not put my son at risk by plopping him on the back of a wooly sheep and telling him to hang on. He’s full of enough bad ideas on his own, without having his parents fill in the gaps.

As of now, we’ll leave things the way they are. Manchild can test drive horses, and if it’s not his bag of worms he can stop, no harm done. Girlchild is going to be beside herself with glee, and I know I’m gonna have to pry her out of the saddle with a stick come fall. But I’m a stickler for not over scheduling, and one sport is plenty during the school year. She already takes aikido, and after playing catch with her this week-end, both her father and I agree she should stick with the martial arts.

Realistically, I don’t think 4-year-old boys like Manchild need lessons of any kind. He’s as happy as a pig in the mud with just a big stick and the whole backyard to beat it on. Give him a paint brush and watch him go to town. He’ll have years to sit still, listen up, and get tested. For now, a summer spent exploring stuff and trying new things is good enough for me. 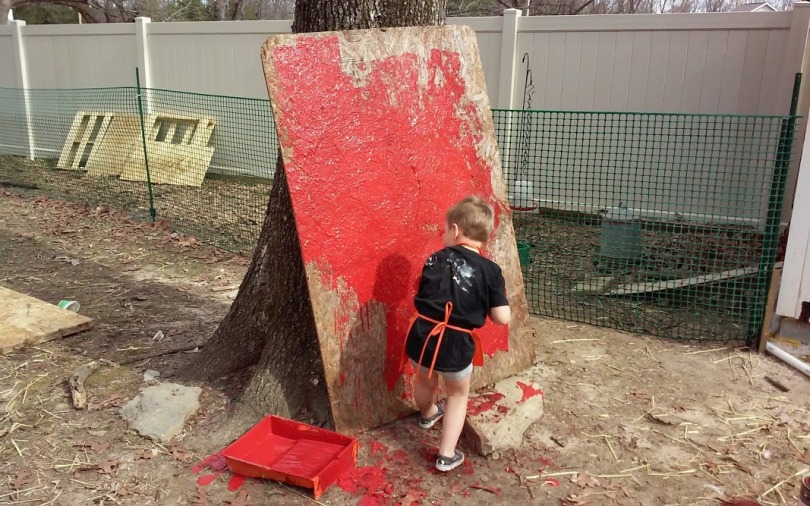