This Memorial Day week-end we followed the crowd and braved the elements, and took the Schenaniganlets camping. Tent camping. For the very first time. Captain Schenanigans and myself have camped together, and also not together (back in our pre-married lives),  multiple times. We’ve rented Maryland State Park cabins (the world’s best kept secrets) for several family vacations with the young ‘ens. But we had yet to brave the task of actually convincing our bear fearing tiny humans that they should close their eyes and blissfully slumber under the magnificent protection of a nylon sheet with a mesh window. They had concerns.

But the ten families from our church who had already rented campsites around the White Oak Loop of New Germany State Park can’t all be wrong, so we hitched our wagons to theirs and took a chance. It was time for another adventure anyway.

The schenanigans began when we pulled out of the driveway at 4:15pm on Friday, and the french press I had overnighted from Target.com to ensure my children’s safety this week-end, arrived at our home at 5:13pm (according to their tracking records). That meant, we had no reliable means for adequate coffee intake this week-end. Five hours later our 2.5hr drive ended with a few bumps and the loss of cell phone service and Google Maps availability; just before we found our campsite. Ugh.

But we were greeted by multiple friends with willing hands to help us pitch our tents in the romantic beam of our SUV’s headlights. All worked out well. The next morning (5:50am, to be precise) the huge black crows rooming in the trees overhead decided to have a rave. Apparently this morning scream fest was part of their daily routine to greet the dawn, but I’m fairly certain dawn could find its way without any auditory assistance, thus letting my kids sleep in. Nope. We were up for day #1 of our “vacation”.

Captain Schenanigans fried bacon and eggs, the Schenaniganlets sat at the damp wood picnic table and sucked their thumbs while their sandy blonde hair stuck out from the left and right sides of their heads, depending on how they had been sleeping. Their personal bowls of cinnamon apple instant oatmeal sat cooling in front of them while they silently gathered their bearing and took in their surroundings. No predator attacks yet, so they might be safe.

Since there was a lake with a small beach, and promises of swimming had been made back in Baltimore when we were still glamming up the idea of roughing it in the woods and ignoring all vulnerability, the kids called us out and forced us into the lake. Well, let me clarify, since I was the last parent to rise, I was the one indebted to do the first kid related activity, so the children forced me into the lake. At 9:27am. It. Was. Freezing!

The scenery was too beautiful for words, the water clear down to your toes, and small shy sunfish scampered away from us as we moved. Had the temperature of the water not been affecting my cardiac rhythm, it would have been perfect. But after wading in waist deep for modesty’s sake (my most recent swimsuit purchase is chlorine resistant, but does not have the little skirt around the thighs that doubles as a public service), I decided that was far enough and life guarded my spawn from there. They were thrilled. Since children have no ability to feel temperature when they play, and though today was an extreme challenge, they were willing to overlook a minor drop in thermia in exchange for a chance to swim for as long as they wanted. The fact that we were one of only three families braving the waters at that time of day was merely icing to our aquatic cake.  You could taste their adventurous excitement, even if you could only smell the lake water.

The day passed by with new experiences and opportunities. The kids had tuna kits for lunch with they adore ( I love dish free meals), and bounced around from campsite to campsite until it was time for the craft at the nature center. Back down the killer hill we knew we would dread come dinner time, we joined the small room full of children making owls out of toilet paper tubes. I explored the two cement block rooms that made up the Nature Center, and learned animal facts while the kids colored (did you know that 95% of a bear’s diet is vegetarian, and all the worker ants you see marching across your kitchen floor are female).

Next on the list of promises we were being held to were ice cream cones in the lake house. The Schenanignalets questioned me as to the role of a Park Ranger between licks, and after fumbling for a real answer, I corned one of the park’s own men in green and passed the question on to him. His answer didn’t seem much different than mine, but he did offer to show the kids some new fish nests the staff had discovered that morning. We all tromped our drippy cones out of the Lake House and down to the dock where we leaned over the edge and gawked. Sure enough, all over in the shallow water along the shoreline (just where all the canoes and kayaks were supposed to launch) were what looked like miniature crop circles of rocks. The mama fish hovered over the nests in a rare opportunity to protect them as this small lake offered very still water. It was amazing. The red rocks in the water looked like the railroad gravel along side of train tracks, but had all been intentionally placed in each round nest by the mother fish. God is just so cool.

As with most ethereal moments, someone had to get injured. This time Manchild opted to break the spell of awe by falling off a wooden bench and scraping up his back. Superman flavored ice cream (gross, even more so if it was made out of real Superman) splattered everywhere and I spent the rest of the day looking like I had trouble finding my mouth as it soaked into my t-shirt as I picked him up. Ice cream and fish nest time was officially over.

Then Manchild proceeded to give me my favorite moment of the whole journey. He fell asleep on my lap for a full hour ,while I rocked him on a gorgeous wooden rocker in the Lake House. The big windows overlooked  Girlchild, who was fishing with some friends, and I got to snuggle and kiss Manchild as much as I wanted. As I sat there and cradled my action packed miniman, I prayed for the sun to not burn Girlchild’s unprotected shoulders (God kept her pale), and drank in the beauty of the mountains. The rest of the world can keep their bronze bodied beaches, crowded with beach towels and sand in your tender parts. I will seek the forests and lakes whenever I can. There is such beauty in stillness.

The weekend passed on with more of the same. One night Girlchild and her BFF slept together in their own tent (epic failure), one night the rain had flooded our tent and we slept in the back of the Pilot (fairly enjoyable, actually). Manchild and Girlchild enjoyed a rare freedom of joining the feral pack of church kids who bounced from campsite to campsite, and were permitted to free range around our loop.Manchild managed to pilfer a chocolate munchkin off of someone whose name he could not recall, and Girlchild played endless board games and Rat-a-Tat Cat with her BFF who never had to go home. As soon as I learned to let go of sleep schedules and caring how much sleep my kids got (that was a tough one), the whole trip became freeing and relaxing for everyone. Assuming you enjoyed dirt.

While cheap family vacations are always welcome in this house, it was the happy husband (I had no idea just how much Captain Schenanigans loved group camping) and late night, quiet, girl chats by the campfire that hooked me. Like water to my introverted soul. As the last few minivans were pulling away from the loop, a handful of us gals stood together, unwilling to let this week-end be a one time memory, and planned the next trip in the Fall. I can’t wait. Captain and I are already looking for a bigger tent and better ways to streamline the packing experience (we forgot the can opener, trash bags, and a dish pan).

Upon arriving home, a kind neighbor brought over our french press (I had already sent a scolding letter to Target), and listened to us all talk at once about our trip. Apart from the moment when Manchild requested we leave Girlchild on the side of I-70 as punishment for being mean to him, and the night Captain Schenanigans’ DIY hammock ripped apart as he slept in it, I did, in fact have happy campers.  That was enough for me, and I have already contacted my chicken sitter to discuss his Fall plans! 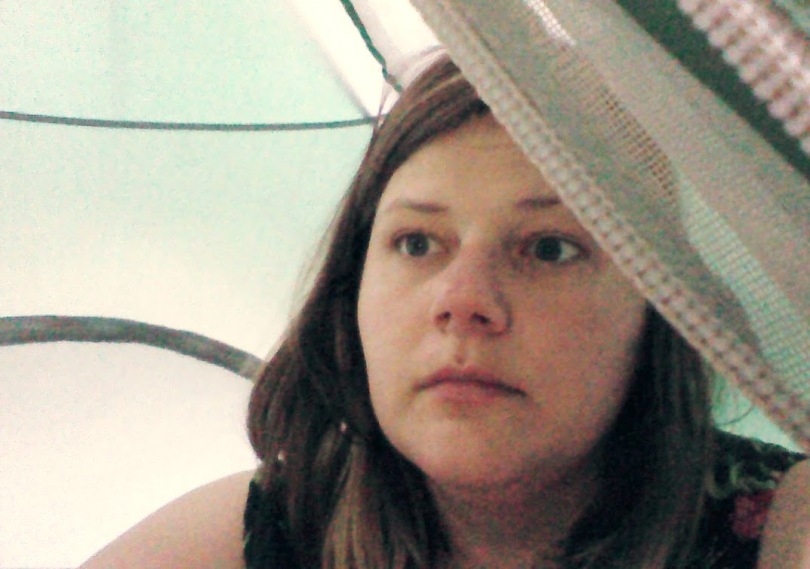 First morning, waking up before 6am- bleary!

The blue tent didn’t even come home with us. Trashed it, going to buy a family tent now. 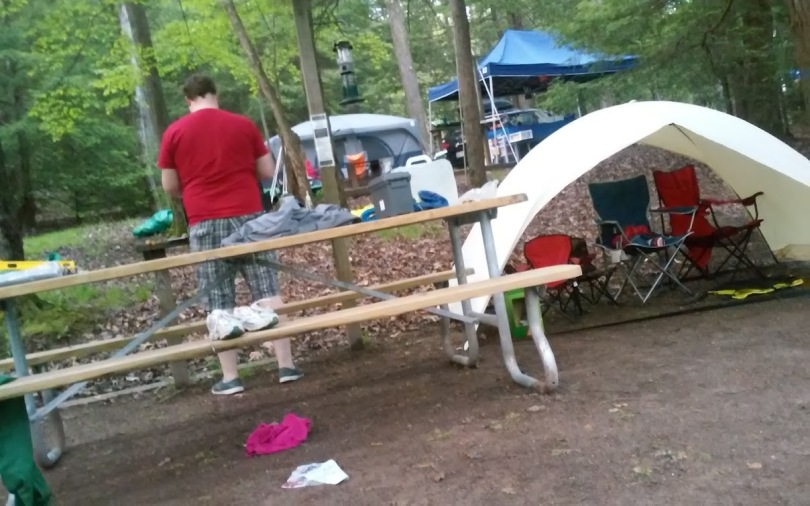 Half of our site, with friends close by for entertainment value.

Captain Schenanigans and his buddy chat about rain tarps, while Manchild determines how to work a portable chair.

Girlchild and BFF needing nothing else in the world, playing Zeus on the Loose or Rat-a-Tat Cat. I dunno which, praise the Lord I wasn’t invited. 🙂