Tonight was a tough night in the Schenanigans household. Bad Bunny was out for a romp in the yard, and was struck in the head by a thrown wooden gardening stake. He lay limp in the yard while Manchild ran to get me, and then spun circles on his bottom after I got Superneighbor to come help me and watch the children.  Superneighbor got Bad Bunny off the ground and into our pet carrier. Girlchild prayed, and Manchild went to play in the sand box after reassuring the rest of us that Bad Bunny was still breathing. All must be well, in that case, when you’re 4.

A quick call to our vet’s office and we were on our way. Little did we know he was the last of many emergencies that day. I could hear Bad Bunny turning circles in the carrier and panting. He kept resting with the mesh bars of the door between his teeth. This can not be good. After scolding a few other pet owners through my closed windows for poor parking decisions in this teeny, tiny clinic parking lot, I finally was able to park my car and hustle the bunny inside.

I was full of emergency energy (I recognized the familiar feeling like an old friend, Manchid is an ER frequent flier) and pent-up worry, the kind that makes you call people close to you and gather your troops for support. The thing is, I don’t even really like this bunny. In fact, I had been calling him Hawk Bait for a few weeks recently until Girlchild requested I knock it off and parent better. Or something to that effect.

So here we are, sitting in the waiting room, pondering the outcome for an abandoned bunny that came into our lives after being left in a cage at the end of a friend’s driveway (he had a farmette with bunnies, but thought Bad Bunny was neutered and passed him along- I wish). A bunny that taught us how much Girlchild LOVES bunnies, lead us to the 4-H Rabbit Club, and was the first and only rabbit Girlchild has ever shown.

Going into the exam room with the vet I felt like scum. Every question the vet asked made me feel guilty and incriminated. It was all in my head, I’m sure vets don’t judge. But I should have been outside supervising all thrown sticks, not making dinner. I don’t know why the bunny had an internal temperature of over 107.5 (normal is up to 103) but I should have had the AC on higher in the car. I should have parked someone in in the parking lot and flew out of my car like they do in ER, not patiently wait my turn in line and avoided  making a scene like I do in my life.

Bad Bunny got pain meds and fluids, but did not perk up much. His right eye was always shut, and his wide pupil did not respond to light. He had balance problems, brain damage, and probably would not eat or drink. The odds of finding a dead bunny in the morning before school were high, and apparently bunnies are not good rallier’s. They tend to prefer heaven over a will to live. Honestly, I can’t fault him on that.

So there I am, signing a form to have the vet put Bad Bunny to sleep forever, tears falling on the form, and failing to remind myself this is my least favorite pet. The vet takes Bad Bunny in the back and I am not allowed to come because bunnies are sedated with gas, and somehow this might affect me. I lost track of what she was saying at some point.

But when she came back to the waiting room to tell me he’s gone, I asked to see Bad Bunny again. I went to the back where they were wrapping him up and placing him in the pet carrier so we could bury him in the back yard.  He looked happier, honestly. I see now why people who aren’t so great when they are living become post-humus Rock Stars when they pass. There is just something in your heart that dumps out a lot of love and beautiful memories over something (or someone) who was quite less that saintly in real life. I consider it a chemical reaction or dump in the brain. Illogical, but happens no less.

Tonight I went out to the large hutch we divided into rabbit 2 pens, and took out the dividing wall. Good Bunny hopped into the forbidden side, looking for his friend (who also unnecessarily took a chunk out of Good Bunny’s nose last month). He sought, but never found his bunny friend. Quite soon after wrapping his small furry mind around that new truth tidbit, Good Bunny made short work of claiming his new ( albeit, super stinky- Bad Bunny peed up walls like a boys outhouse) kingdom. After removing the extra food crock, I left Good Bunny perching proudly on Bad Bunny’s house. Happy as a hippo in a brand new mud wallow! Way to wade through those feeling of sorrow little guy, you’re a champion at the brave face!

So Rest In Peace, Bad Bunny. You were our gateway bunny, and will always be remembered. I’m sure polite bunnies are more quickly forgotten, anyway. So good job not being one of them! 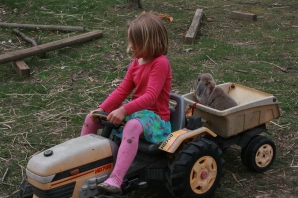 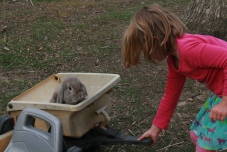 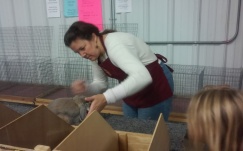 2 thoughts on “Not All Bunnies Go To Heaven”