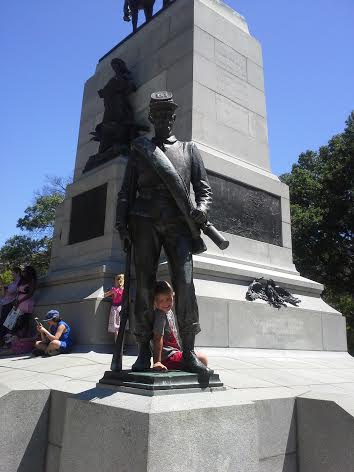 “The President is safe tonight, after Secret Service agents tackled a 4yr old boy for climbing over the gate to the White House lawn today.”

“Secret Service Agents have detained a small boy for questioning. Unfortunately, no one can understand his answers due to his rapid fire yet slurred speech.”

“A drug sniffing dog found a playmate today in a lost child, wandering aimlessly around the DC Metro area. The boy was not scared, only appeared hungry and looking for an audience.”

All headlines that played through my head as I held the boarding pass in my hands for an 11:30am White House East Wing tour today. Are we nuts for taking a wild child to the White House? Will any of us be detained for misconduct by Secret Service? Can you break a White House?

This all started when a friend working at the White House arranged a tour for us. Since Girlchild was studying the White House in school, and Captain Schenanigans grew up outside the USA during all the boring field trip years, I knew my little family wanted me to say yes. Unfortunately for me, I had been to DC on enough field trips and family ventures that, despite never touring the White House, I had zero curiosity about its contents. I hate driving, parking, and crowding into ANY major city. I’m not a downtown girl. I’m not an uptown girl either. I’m more of an out-of-town gal.

But, I love my family, so I agreed we’d go. We arrived early for the tour (no, seriously, we did) and were directed across the street to the White House Visitors Center to use the bathrooms and mill about to kill time (no sense in wetting our pants in the White House).

Looking back, the Visitor Center was really more informative and interactive than the White House tour. The kids liked it a lot, and we saw a movie about living in the White House as a family. Well, the beginning of it anyway, then we high tailed it back to the crosswalk to get in the looooong line for the 11:30am tour. FORTY-FIVE minutes later we had gone through 3 checkpoints with armed guards who checked our ID’s and called the kids by their names (each time the kids looked up wide-eyed and uncertain, sure they were in trouble).

The East Wing is a 30-40 minute self-guided tour. Manchild and I did it in 10-15. He was hungry, slippery, and those super important historic rooms were only cut off from him by a single rope. If you can’t read, and don’t know history, this isn’t your bag. Manchild was most amazed by the clawed-feet at the base of several light stands. We leapt out into the sunlight at the front steps of the White House and waited for the other half of our team.

Turns out, I had been focusing on the wrong child. It was GIRLCHILD who the armed guards declared to be “full of energy”, and Girlchild on Captain Schenanigan’s shoulders who the Secret Service had to stop and request she be set back down on the ground. Lest any chandelier accidents occur.

As we walked past the White House lawn, I pointed out the super tame City Chickens to Girlchild. She rolled her eyes and corrected me, stating they were pigeons. She hates when we tease her by using the wrong names for things. Smart kids get annoyed by such antics.

After an outdoor lunch under a tree along Food Truck Row, complete with serenades of Middle Eastern music on full bast, we amble on over to the Museum of Natural History. The Captain wanted to show the kids dinosaur bones while we were in the area, and I remember this being my favorite museum as a kid. We already schlepped down here, so why not?

Another suuuuuper long line for the metal detector and free admissions later, we are packed in like cattle and yelling and pointing things out to the kids over the crowd. We see bones, mammals, and the great bull elephant in the Rotunda lobby. My fond memories of this place are washed over for a new reality that includes less mammals than I remember, way too many people, and way too small of spaces. The kids liked the dino bones, for all of 45 seconds. There’s just not that much to do with them.

Back down the steps and I bribe my melting kids back under-control with ice cream, while my husband hoofs it back to the car to pick us up. Wait in another line at the ice cream truck (very thankful it was not hot out) and the chocolate snowball in the picture Girlchild had been waiting for was actually root beer. Tears and indecision flow as the rest of the line waited behind me. Manchild  agrees to take the already made root beer snowball, but then begins crying too because it’s not ice cream. Girlchild rally’s (I completely believe this is the work of the Holy Spirit) and decides firmly that she wants the root beer snowball in her tearful brother’s hands. Now we’re back in business. Manchild gets his chocolate cone and I get sprinkles.

With all our hands full, I set out to complete my orders; which were to have all 3 of us arrive in one piece across 2 crosswalks, and park our squishy bits on the shady smooth  steps of the IRS building. Then wait for our chauffeur.

Manchild complained about my grip on his shirt collar, but with both of his small hands busy holding a chocolate volcano erupting down his fingers, I had to hook my fingers on whatever I could to move him past traffic. Girlchild had earned the right to free range, but was verbally hustled just in case some city driver went rogue. Man I hate crowds and traffic.

Apart from one brief stop in a mostly empty parking lot at a college for Manchild to make use of a very large Chickfila cup when Nature knocked at his backdoor, we made it home in peace. While we did listen to the same 9 Summer Bible Camp songs for the better part of an hour drive, I opted to ditch the shotgun seat and climbed into the 3rd row of our Pilot for a quick nap. Last time I stretched across the back seat of a moving car to sleep was in college while my parents drove . It’s an indulgence I have sorely missed since becoming an adult.

Turns out the kids snoozed in the car a bit as well, and come bedtime we were all knackered. I asked each child what their favorite part of the day was. After all that effort and motion to be a tourist for them, I was genuinely curious what their minds processed.

“Getting a Snowball” Girl child informed me.

“Eating macaroni and cheese with peas for dinner” Manchild relayed.

Why do I set myself up for this every time? Just like my memories of DC as a child, the only things these 2 young ‘ens are going to remember of DC is walking hundreds of blocks in the sun, and cold desserts.

Oh well, at least we can say we tried. I broke out of my routine and agreed to a day trip that took us SOUTH on I-95 for once (Ahhhhh, not the traffic, anything but the traffic) and my handsome husband got to enjoy our Nation’s Capital without having to install anyone’s conference system, or teach a training on their soundboard. He got to see sights instead.

As I type this, I whisper over to my husband laying in bed.

“What did you like most about today?” I ask, knowing he was the real reason I agreed to visit the White House.

“Me?” He asks (’cause you know I have those 6 other spare husbands stashed in the root cellar).

“I liked my (Greek) lunch…and the food trucks.”

Of course you did. 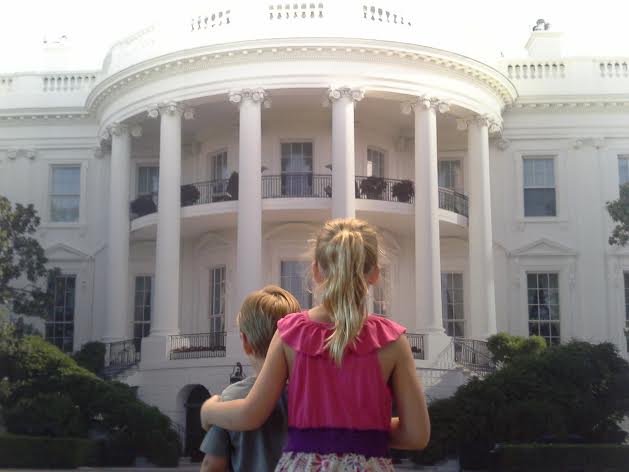