Well, Fair Season is upon us now, and let me tell you it is a lot more work to enter the fair, than visit the fair! I took all those colorful displays, large and small animals, and home grown produce for granted for years… right up until now.

Now, I have to be the responsible one (somehow this keeps happening), pre-registering which animals qualify with which kid, based on age, club membership, and species. I’m pretty sure I registered some twice, since I couldn’t remember registering the first time.  And Heaven help me with figuring out which numeric code on the registration form that tells them I am entering an adult, male, rabbit to be shown by a 6yr old child. That doesn’t even include breed or color.

But, we got ‘er done, and already have one fair under our belt, since the Baltimore County 4-H Fair was this month. It was small, but proud. Girlchild entered handmade soaps and cleaned up in her solitary category. She has to be 8 years old to enter animals in the 4-H Fair, but not in the Hereford Junior Farm Fair! Even Manchild meets the qualifications to show his hens at this event. He’s breathing and under 18 years old.

So that brings us to today, when we had to have Manchild’s hens tested for diseases within 10 days of the fair. Nothing like chasing 2 free range hens around your backyard in a thunderstorm in order to crate them, then listen to them, and arrive on time at the test site.

Actually, I thought the whole thing was kinda cool, and want to explore becoming a tester in my spare time. It’s kinda like a small scale cross between a vet tech and a nurses aide, mixed together. I can do that! Plus, I like blood and science.

SO, we got our girls tested (negative, of course) and they got shiny new bracelets to let the world know how healthy they are. Batman was an unhappy camper, but Neigh Neigh was used to being Manchild’s pet, so having her throat swabbed and her under arms pricked was child’s play in her book. Neither of them let him touch them voluntarily!

One of the fun aspects of the Hereford Junior Farm Fair is that there is a pet show the Friday night before the one day only fair. Girlchild is entering Lola, her 3 week old runt of the litter bunny . They want to win tiniest pet.  Manchild is taking Jax the Barncat, on a leash. I’m only hoping they win least-predatory. Jax was banished to the spare bunny hutch while the rest of the kits had gym class yesterday. He was way too interested! Also, Jax is the only pet I trust Manchild to handle, because it can fight back. Manchild has been promised a bunny when he turns 5, because he is way too rough for one now, and Girlchild got her first bunny at age 5. Truthfully, I doubt 6 months will make a huge difference. 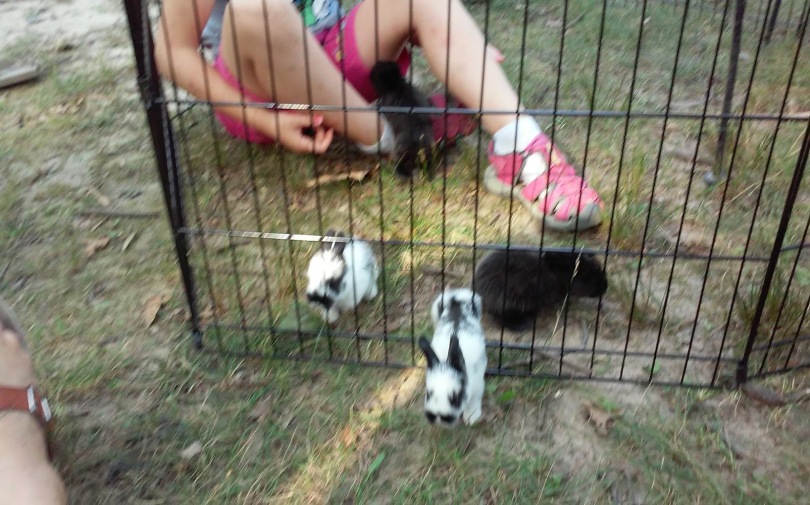 As we got closer to a pet store, coming home from the testing I suggested to Manchid that he might like a more industrial strength pet. Say, a tortoise? As close as I can get to a Ninja Turtle without the huge tank of water to clean. Manchild thought that sounded splendid, and so we stopped at Petsmart to price their tortoises.

Now, a fun fact about Petsmart is that you can bring your pets to the store with you. The fun fact about this moment is that we had 2 show hens in the back of our truck during a Baltimore summer. See where I’m going with this?

Neigh Neigh and Batman (the dark one of course) riding in style!

Yep, out came the hen crate, into the Petsmart cart, and both gals quivered with fear. Until we got into the store. Then their eyes got huge (as did everyone else’s in the store) and they began to become curious. They had never seen anything swim in a fish tank before! Dogs were a mystery, too. We stayed away from the cat room, I didn’t want to clean that much poop out of the bottom of the crate. 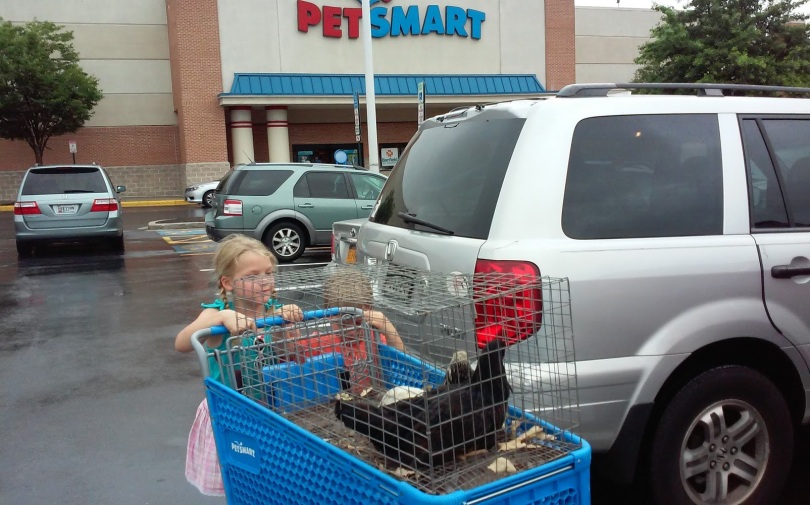 The hens prepare to go retail!

A nice lady named Juanita got out the one female tortoise they had in stock, and placed it in Jonah’s hands. She then informed me that this one was only 3 years old, and they live to be 50. Yep, 50 years old. This one was also $115 without equipment (which we could probably piece together at home). Hope Manchild’s wife and kids like tortoises!

Thankfully I had already placed a call to my friend in the wildlife education business, and thought perhaps she had a few spare tortoises kicking around her basement. Or at least sound advise for/against them. I prepped the kids that we were only looking today at Petsmat, not buying. There were no complaints.

So I am still awaiting my return call that will make or break the tortoise idea. If that goes belly up, I hear armadillos don’t need 3 types of lights and heat lamps. I may look into that. It’s just not fair to set anything with a soft, squishy exterior up to be loved by my mini-warrior. Because sometimes, love hurts.

One thought on “A Pet for Manchild”