I know something you don’t know… Well, most of you anyway. Did you know that female bunnies can have 2 pregnancies at one time? Yup. WikiVet explains it best.

“The female rabbit has a bicornuate duplex uterus. This has two separate uterine horns and no uterine body. Each horn has its own cervix, and the two cervices open into a single vagina.”

SO there you have it. Learn something new every day, eh? Yeah, us too. For example, today we took Manchild to pick out his very own Flemish Giant. A huge, massive, Cocker Spaniel sized bunny that I think will be a great match for my son. If you Google Flemish Giants, the pic below is what you find.

How we ended up deciding on this is a long, twisted tale. Naturally, when Girlchild’s bunny had kits last month Manchild wanted to keep one like Girlchild did. But Girlchild’s bunnies are Mini Lops, and a bit delicate for such a boy as this. Manchild was still honing his gentleness skills.

So, we investigated tortoises/turtles. What could be a more industrial strength pet?  Well, turns out there is a lot of drama that goes a long with turtles. We wanted the land lubbers, not the water turtles, but even they require temperature and humidity monitoring, 3 kinds of lights, live FIFTY YEARS, and cost over a hundred dollars each. For a 4-year-old? No, thank you.

As we were hemming and hawing about turtles for 2 weeks, Manchild really got good at handling baby bunnies. I was surprised. So we opted for an industrial strength rabbit breed for 2 reasons. One, so it can hop around the yard with no problems and be a good boy pet. Also, when it goes to the show table with Manchild (or even Girlchild if he lets her) it’s a new breed and we aren’t competing against ourselves with another Mini Lop. Basically, it’s another shot at a blue ribbon.

Most Flemish Giants kits around here are about $40-$50 dollars each. But we were able to locate ones for $15 from a man who had too many and a new batch just born last week. They grow fast! It was a steal, so we made a big deal of telling Manchild he was getting a surprise all day today. Then, before we left the house, we finally told him that he was going to get the baby bunny he had been begging for all summer!

“Noooooo” Manchild wailed ungratefully. “I thought I was getting a weapon!”

Sigh. Of course you did. My mini-soldier has a one track mind. Once we explained this bunny was something he wanted and would be his very own, he rebounded with glee. Excitement trickled in like an over-full diaper and he began bouncing towards the front door. That was a bit more of what I was hoping for.

On the van ride over to the breeder’s, Manchild came up with a full name for this 8-week old kit. Hopper Hoppie Hops. Sense a theme here, do ya? It was ultimately shortened to Hops, though for a while there Manchild was gunning for Red Light. Because the bunny was going to be super fast, he explained. Yeah, I’m not sure I get it either.

What does this have to do with a bicornuate duplex uterus, you ask? Well, remember that Girlchild had 4 baby bunnies a month and 5 days ago (gestation is a month, FYI), and papa bunny has had no contact with mama ever since. But, I had put papa with mama a week after her initial breeding session, thinking she was still open (not pregnant). I was wrong. Sort of.

Tonight we come home with new little baby Hops, and as we are settling her into her new hutch, I send Girlchild to feed her 4 babies (only 1 still needs a home) and their mama more pellets. She comes tearing back across the yard like her shorts are on fire, hollering that Girl Bunny had more babies. Now, Girlchild has recently taken up lying as a sport, and calling it joking. Never about important things, but it’s still annoying. So naturally, I didn’t believe her.

Sure enough, looking into the hutch I find 2 brand new naked baby bunnies! I am stunned- sort of. See, I sorta suspected this may happen when Girl Bunny began fattening up again post partum. I even had another 4-H volunteer check her by feeling her belly, and she was declared not pregnant at the Farm Fair last Saturday. Oops. Once again, we suck at Rabbit Husbandry. This is our first and LAST attempt at rabbit breeding. We are either terrible or really, really good, at making bunnies. I can’t decide which. Probably the former.

Yesterday we owned 6 bunnies, and were keeping 3. Now we own 9 bunnies and are keeping 4. I’m a bit concerned about what tomorrow may bring, at this rate. We are up to 20 pets in our backyard now if you count the barn/in-my-kitchen cat.

But what to do with 1 nursing mama and 2 litters of kits that are 4.5 weeks apart, in one pen? After calling around, I was given the advise to separate the older kits (party in Hops’ hutch – woot) and syringe feed them kitten milk replacer. For once in an emergency (it’s 9:30 on a Sunday night in the suburbs), Walmart had what I needed. 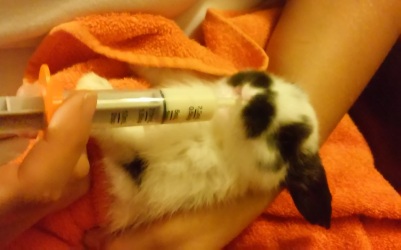 Only 1 kit got the message about free keg stands in the human house. The rest refused to gulp down the replacer like their greedy little sister. After further online research, turns out the situation is not so dire after all. I could soak dry bread in the replacer and feed it to the kits, give them a bowl of it for half an hour before it gets contaminated, or simply forgoe the whole thing and at this age they would probably be ok.

But since I went through all that trouble, and I have a huge pre-mixed carton of kitten milk replacer in my fridge, I think the babies may be getting bread slushies tomorrow for brunch. I don’t want to waste the milk replacer, nor do I want to risk any getting in their lungs with a syringe. Man, motherhood is complicated!

So now you have the whole sordid story on why the Schenanigans Family will no longer be having an Easter litter of bunnies. Or any ever again. I see now why God had a friend drop off a free rabbit hutch yesterday, knowing full well by tonight it would contain 5 baby bunnies (one of which having huge mule ears that cast shadows on the rest of her crew).

Like most of our family life, this rabbit situation  may be a hot mess of cute and crazy, but I gotta tell you, looking into that hutch of 5 little hoppers is just about the sweetest thing ever! While Captain Schenanigans would never have agreed to all of this had he known what was coming down the pike, I have to say it makes for a great story! And now all my readers are just a little more educated on rabbit uteri than before. So my work here is clearly done.