It’s been an adventuresome summer here in Schenanigans Land. While we had minimal amounts of plans in place before the weather heated up, we certainly filled in the gaps pretty steadily after. For starters, we kicked off Summer with tent camping for the first time on Memorial Day Week-end. We’re gonna end it the exact same way, too! In the mean time, here’s what we’ve done in between:

-Had cousins visit us

=Showed hens and rabbits in the Hereford Junior Farm Fair

-Toured the Museum of Natural History

-Attended the Grange Fair in PA

-Creek walked with a Blue Heron

-Swam in outdoor and indoor pools

-Had a litter of bunnies

-Buried baby bunny Lola after the cat killed her/discussed why God doesn’t stop bad things from happening/discussed life lessons that are better to learn as a child.

-Hosted BBQ’s so Captain Schenanigans can use his smoker

-Spent HOURS pushing kids in the hammock, having only a few fall out

-The kids attended their first funeral of a distant (to them) relative, they were unimpressed

-Attended our first Spanish speaking birthday party, we all sang in Spanish which we practiced with Ricky Martin on Youtube on the drive up

-Went to Chuck E. Cheese for a LAST NIGHT OF SUMMER family dinner!!!!!

Now, here’s why this last one is significant. For starters, it happened tonight. Second off, I hate, HATE, hate Chuck E Cheese. Those of you lucky enough not to know of this establishment, it’s a “Family Fun” restaurant. Think arcade games and crappy pizza. But Girlchild looooves it. At some point during the summer Manchild got to go without her, and that just didn’t sit right with Girlchild. So, after much fast talking and future promising, I told Girlchild we’d go when school started to celebrate the new school year (she’s still young enough to believe this is something to look forward to). Look out First Grade, here we come!

Naturally, as with all events I dread, the kids forgot about it and I was left with the moral dilemma of fulfilling a promise Girlchild can’t remember today (but there’s a great chance mid-December she will remember and lay into me for breaking this promise), or suck it up and subject myself to an evening of torment that I could have avoided. Since I hate waiting to see if I’m in going to get in trouble, I opted to keep my promise, and use it as a surprise for the kids.

Captain Schenanigans and I decided to make a production out of this evening, and blind folded each child as they got in the car. Increasing the mystery was definitely the way to go. The kids were giddy and full of questions. We made wrong turns, turned in circles, and flat out lied to them to throw them off our trial. After all, our destination was only a mile away.

And if you feel the blind folds are at all detrimental to the children, feel free to go ahead and blame Chickfila. After all, they are the ones that gave us the bandannas in the first place! 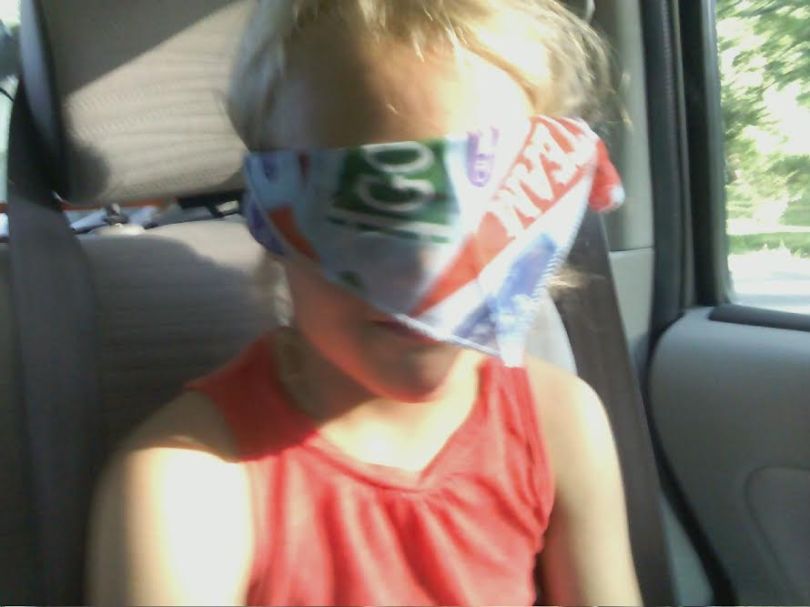 We made sure both kids were lifted out of the car and set firmly on the sidewalk facing Chuck E Cheese before we simultaneously yanked off the bandannas (and ripped out multiple strands of blonde hairs from their tender little head in the knot) in slightly lopsided unison. It took a moment to sink in, but as they realized where they were the excitement bubbled over and Girlchild even squealed. That’s high praise from a little girl who’s hard to please.

We wiggle our way in the door and dance-walk up to the Arm Stamper Woman as fast at Manchild’s stubby legs can go. The kids are enchanted. Manchild breaks away to sit on an arcade game as we pay for tokens and pizza, unable to stay away any longer from the pull of the games.

We hand-feed our distracted little fledgling  veggies from the salad bar, and they feed themselves sub-par pizza. Then everyone is declared done, and each child splits up according to the parent of same gender (mostly, Girlchild just wanted a Mommy Date). We divided the tokens and were off.

Now it’s not the games that I dislike about Chuck E. Cheese, although several were broken. While having a non-identified broken ride eat two of my tokens, and then a texting employee fail to replace lost tokens was annoying, it’s not the staff that bother me here either. It’s the over all general lack of parenting here that drives me absolutely batty!

Let me show you, because this happens several times, EVERY TIME we come. The children and I walk up to a 2 person ride. There are 2 toddlers in diapers sitting on a ride. The ride is not moving, nor are there any adults standing around. Unsure of their age, I ask them if they are done? Could we have a turn? Where is your grown up? Nothing. We stand there staring at each other, tokens in our hot little Schenanigans hands, the other children doing nothing. I then realize they are actually  strapped in. Not that they wandered away and climbed on to the train ride unsupervised, someone actually left them there and was using this ride as a baby sitter. Rude. A few awkward and frustrating moments later a woman with another child in tow returns and tells the toddlers they need to get down, and to let other people have a turn. She unstraps each of them, and they sit at the table beside the ride, where the rest of their party was already eating.

Now Girlchild’s favorite thing in the whole world is a good carousel. There are no good carousels to be found at Chuck E Cheese’s, but there is a mediocre one that seats 3 kids. Last time  we visited, Girlchild wanted a ride. There were 2 young children permanently parked on the carousel, just waiting for someone to put tokens in. Now if I’m using my own tokens, I want both my kids to get to ride, since there are 3 seats. No one is watching or instructing the other 2 children, who were waiting for me to start my daughters ride so they could get a free ride out of it. See how this can get annoying? There’s an absence of thinking about others, and each mini-confrontation wears me out.

I don’t want to parent other peoples kids, or teach them manners, or explain about taking turns during my Family Time. It’s draining. After 6 years of encountering this stuff on playgrounds and fast food play places, I’d rather say “it’s not my job” and avoid frequenting such locales. I know my limits, and I need to save my energy for my own kids. Love and kindness is for everyone. But confrontation energy is not to be strewn about like parade candy, and I simply don’t have enough to share.

Let me also take a moment to change subjects real quick and point out that if you purchase the endless salad bar at Chuck E Cheese, in order to make it endless, you must bring your used plate up to the original counter where you paid for your food, wait in line behind people paying to get in, then give the employee behind the counter your used plate. They will give you a fresh one. Between their texts.

Standing at the prize counter, I could feel a vibe of impatience rippling through the crowd. People are wondering where the staff is, and I can’t blame them. Behind me a man in a green striped shirt starts yelling. and I mean really yelling. The kind where you huddle over your children in front of a glass display case, keep your head down, and hope you draw no attention to yourself. Don’t even think about looking. The man accused someone of laughing at him, and vents that there is nothing funny about hungry children. Turns out, the man is angry that his daughter has been kept waiting for an hour for her pizza. The man is yelling for a manager, and clearly, there is none. I feel his frustration.

So, the man begins a very angry interaction with an employee over by the salad bar, demanding to see a manager. He’s yelling that he wants his money back, and fuming over the service. All the employees are dumb struck, and there seems to be sputtering and stammering about locating someone in charge. There is confusion about who that may actually be, and where they are. It’s a real life social train wreck.

Mean while, back at the prize display case, the people next to me are irritated at being ignored. A blonde woman in a blue spaghetti strapped shirt and tiny black bike shorts emerges behind the counter from a side door way, and begins asking people what they want. She can’t find the Skittles Manchild requests, but was able to help the people beside me. A few minutes later a woman in a Chuck E. Cheese uniform shows up and asks the woman to leave the area. The woman explained that people are tired of waiting and the employee becomes more assertive. The woman requests the employees name and defends her position. A real live actual manager type person shows up and aggressively confronts the civilian volunteer, who scampers out from behind the counter.  Turns out that woman didn’t even work there. Seriously?!? Captain Schenanigans suspected she was drunk or high.

The only thing to complete this Jerry Springer free-for-all  is the fact that the employee now behind the prize counter continues texting through out our conversation, as the kids tell her what they’ve selected. I could not believe it!

The whole night was kind of amazing. So much drama, angst, man-anger, and disregard. Best part is, the kids didn’t see a thing. We kept them so focused on the cheap toys and math required to select them (within your allotted ticket number), they were none the wiser to the adults behaving badly. The chaos several feet away, in both directions, went over their slightly-less-haired heads.

Wanna know what the best part of this turbulent night is? That I have fulfilled my promise to my daughter and I am NEVER going back to Chuck E. Cheese again. Not even if you blind folded me!

2 thoughts on “Now THAT is going in my blog!”