SO, it’s been a while since my last post, ‘eh? I’m sure both you readers noticed, and I thank you for your patience. Fall has been busier than I expected, but not in the ways you assume.

You see, dear reader, our family (okay, me) has recently made the gradual conversion from chicken fanatic (we’ve dropped down a notch to simply chicken lovers) to rabbit crazy (and by that  I mean full on bunny squeezers and pet rescuers). We (me) are wildly in love with those soft, big eared buggers, and can not let a day go by where they are stuck in their cages, bored.

See that bunny there? It’s first thing in the morning, and he’s biting his cage because he is bored. See that empty food bowl behind him? Every morning I fill it with pellets and set it on the top level of his hutch. And every day he sends it rolling down the ramp of his hutch to the bottom level. Just ’cause he can.

As with everything, there is a learning curve in immersing ones self (or family) in to caring for a new critter. The learning curve for bunnies is especially steep, since rabbits are fairly delicate creatures. Hence the ease of reproduction. Seems like God opted for quantity over quality when making bunnies, as they are a bit lacking in the toughness category.

A couple of examples of such fragility might look something like this: last month, in a 48hr period, we had 2 rabbits die of unrelated causes. The first one, Patches, seized and died in my arms, due to hypothermia related problems. I forgot to put the flaps down on her cage during pretty awful weather, and then was unable to warm her up fast enough the next morning when I found her. She died in my arms. I felt terrible, she was the mother to 2 litters of bunnies this summer, and her death was my fault. I simply forgot. 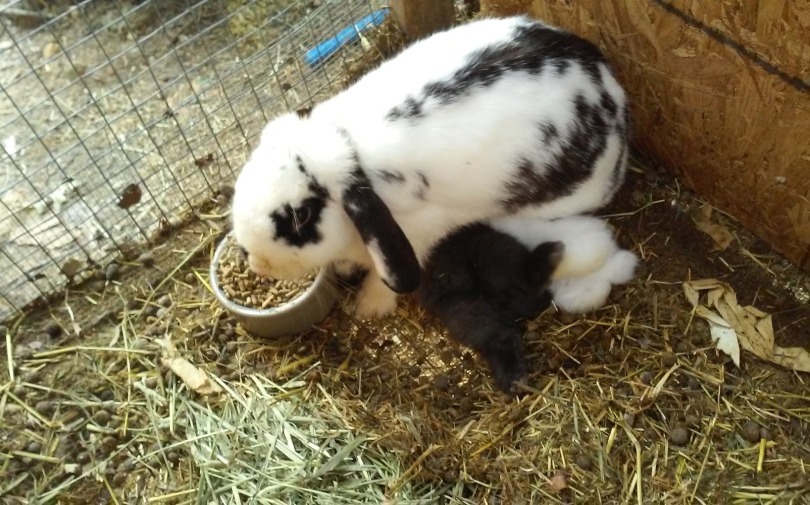 The second bunny to meet the Lord was Hops, Manchild’s mule eared Flemish Giant, and my favorite animal on the planet. Hops appeared to have a snuffly nose at one point, so I brought her in and turned her into a house rabbit. We were so in love with that bunny (Manchild and I), that she had run of the house much of the day, and was only caged at night when the cat came in. Though, she and Jax the Cat were getting along great during the day, no problems there.

Unfortunately, idol paws are the devils playground, and while the rest of us were fast asleep at 2am Sunday morning, Jax the Cat was messing with Hops for fun in her cage. He literally scared her to death. I heard the rabbit scream, jumped out of bed and ran to her cage, where I saw the cat with his yellow paw still stuck through the bars, and the rabbit curled up in her cardboard hiding box, dead. Not a mark on her. It. Was. Awful!

Now, the feeling of grief around the Schenanigans Household was heavy Friday morning after Patches died (her hutch has since been altered to resolve the exposure issue). It was nearly palpable with Hops’ death on Sunday morning. But strangely enough, the kids did better this time around. It was Captain Schenanigans who mourned the hardest. I hadn’t seen that coming, but I should have. I encouraged my sweet husband to go ahead and get attached to this pet, she was our indoor bunny. She’s be here for a very long time. But I was wrong.

After a week or so, Manchild began begging to have another bunny. Girlchild still had her 2 show bucks for 4-H, but Manchild’s sole pet was gone, and he missed her dearly. While on Sunday we had decided no more bunnies, it did seem a shame to have those empty hutches just sitting there while unwanted bunnies sat waiting to be adopted at shelters.

Turns out, our local animal shelter had 2 spayed does (which is a huge plus because neutering bunnies is $200 a pop) that needed homes, and we wasted no time in making them ours. Hops #2 and her sister Fuzz are the latest additions to our family. Hopefully they will fare mildly better in our household then at a kill shelter. We can only hope.

So we are not giving up, we’re getting better. Yes, it was a tough month for bunnies everywhere (okay, maybe just those in our household here in Baltimore), but we made it through, stockpiled a few new spares buns from the shelter (just kidding, we love them dearly) and we’re going to keep growing and learning. I have 2 exercise pens set up with wicker tunnels and boxes to hop through in the backyard, and I just ordered a 3rd pen this week. Now everyone can exercise at once (the girls share a pen) and have a little rabbit Zumba class! This will give then a few hours of enjoyment each day, maybe slow down on the food bowl flinging. I make time to hug each bunny daily to make sure they remember I am their friend, not foe. I practice the same techniques daily with the Schenaniganlets, too.

Girlchild gave her first presentation this month at 4-H on good and bad treats for rabbits. She rocked it with all of the grace and poise her 6yr old soul could muster. We were so proud of her! I actually think it’s a toss up between her love of rabbits, and the buffet style post-meeting snack, as to why we are such good attenders of those monthly bunny club meetings. But I think they’re fun either way.

So while there will be no more pictures of cute baby bunnies coming out of this micro-farmstead (short of a botched surgery healing itself), there will be plenty more shenanigans going down in our hood, I’m sure of it. Just tonight we were chatting with a neighbor in our driveway when Lolan, the smaller of Girlchild’s bucks, comes hopping  out of the garage. We find this precarious mostly because we don’t keep any bunnies in the garage. How did he get in there? Turns out Girlchild was giving him some recess time in the kitchen, then left open the door from the kitchen to the garage. Good gravy, people! Like I said, we’re still learning. The curve is more of a dramatic incline than a gentle swell. But we will get there, and little by little our rock solid foundation of bunny knowledge will increase.

Perhaps one day I shall start a bunny blog to lend a helping paw to all the other struggling bunny mommas and poppas who simply didn’t know their cats turn into jerks at night, or that hair dryers and hypothermia are a tremendously bad combination for rabbits (the warm towels the vet suggested just weren’t enough). Most likely not, but a girl can dream, can’t she. I can’t be this bad at rabbits forever, right?