Bark/cough, thump. Bark/cough, thump. Bark/cough, thump. Whining cold, wet, sleepy boy thumping down the stairs and crawling over me waaaaay too early before the sun was scheduled to arise. Manchild had a croup cough (plus had wet his bed), and my desire to keep him calm so he could breathe was strongly influenced by the fact I had no interest in steaming up the bathroom at this hour of the day to open up his airways. Who gets croup in August anyway? As a nurse, naturally, my kid does. He settles down, dozes til we get up, then sits through a steamy shower. Much better. For now.

Thus began the trickle down effect of modifications and cancellations that must occur each time a child wakes up ill. Yes, we could still meet the 4-H volunteers at the State Fair Grounds to help them pack up chicken crates for this week-end’s fair at the Baltimore County Ag Center, but instead of helping, Manchild would now be lounging on a portable cot while playing the Dots game on my tablet.

No, we could no longer keep our play date with some dearly missed friends, and Girlchild was beside herself with Feelings (not to mention suggestions) about how to rectify this situation. We were all fighting post-nasal drip, and the plan now was to lay low and keep it to ourselves. Easier said than done.

Starting with an unscheduled trip to the local second hand store to donate extra furniture leftover from this week-end’s game of Schenanigan’s bedroom roulette. Then off to the Fairground where I stayed out of the sight of the Schenaninganlets for 19 minutes too long during my 20 minutes with the volunteer, and returned (10 yards around a corner) to 2 crying children with mottled red faces. Cue the Mama Guilt.

We press on to deliver a 4-H Membership Card to a friend and help his mama with fair registration, then meet FunAuntJessie for lunch. It really was fun.

By now everyone is drooping and Manchild is hacking, so we return home to re-dose on antihistamines and regroup. Realistically, drug the kids and let them watch Netflix. During this a woman came to buy a wooden table we no longer needed after changing bedrooms, and I sold it for $10. Not much, but considering I lifted it from a curb in our neighborhood last year and invested no work into it, that’s a deal to me! The money went into the Skateland fund in which the kids are saving up (via me selling my possessions on Craigslist- go figure that one) for an afternoon of family skating with lots of friends invited. The Schenanignalets love to watch the money in the pot grow (or in this case, our gravy boat).

Now for the sticky part of the day. SOooooo, it turns out that the sophomore slump of Fair Exhibiting is real. While I had managed to meet all the deadlines, clear my animals health,  and show up with extensive paperwork in had at both fairs we entered last year, that was due to a LOT more hand holding than I gave myself credit for. This year was different, by a lot!

For starters, Girlchild nearly missed showing her artwork in the Baltimore County 4-H Fair last month because the deadline was over 5 weeks  before the date of the Fair. I assumed I misread the information, surely no one was ready to make decisions on entries that early in the game, right? Oh, so, so, wrong. I ended up calling and e-mailing anyone I could to bend the rules so my little Clover (too young to be a real 4-H Member, so they are called Clovers) could enter her dearly made 6 art projects in the Fair. Then proceeding to cry in my cubicle at work over my own lack of organization. She was going to miss entering the 4-H Fair and it was all my fault.

Thankfully, the 4-H Board had mercy on me and allowed this ONE TIME late entry, along with a stern letter arriving later in the week, informing me that this shall never happen again. I got it. Scared straight. You betcha!

Except that I didn’t have it ALL. Today is Wednesday, the only fair Girlchild and Manchild are both able to enter their animals in is this week-end, and guess who forgot to get their chicken’s blood tested for a disease that no bird in Maryland has had in 20 years? This mom. In my defense, last year an e-mail went out in the required 10 day span before the Fair instructing us to bring our birds to a designated place for testing at a certain time (the results were only good for 10 days). This year, there was no e-mail, it was every man (or mama) for themselves, and I had forgotten about the whole darn thing.

By now  I am downloading the very short list of approved Baltimore County bird testers from the Maryland Dept of Agriculture Website, and leaving pitiful voicemail messages on stranger’s phones. No one calls back, and only 1 woman answers her phone. She has no testing materials, and lives 2 hours away. I would have driven it! That day, packed up both sniffling children and hauled 6 hens on the 4 hour round trip mission. But it wasn’t an option. Only cancelling my plans for over half our Fair entries was an option, and it stunk.

So I found the kids with my head hung low, broke the bad news to them that none of the chickens could go, and apologized like a champion. Girlchild could care less, she had 2 rabbits going already. Manchild was devastated. His bunnies are a little more, um, resistant, to his personal contact, so I had planned to leave them home and load him up with poultry that can be shown without touching them. No chance of anyone making a break for their freedom since they are shown in cages.  But now a tearful Manchild informs me that so long as he can take 1 rabbit, he’ll be okay with missing the birds.

Back to the phone. I contact the volunteer I helped this morning and threw myself on his good graces. I know the admissions forms are no longer available on the internet. I know the entries are closed. But I messed up, and could we puh-lease just add one more little bunny to the list? He was gracious, allowed the change, and informed me that while Manchild may win ribbons, it was too late for him to win the $1 premuims that each child entering would be awarded for their animal. That was fine, I’ll pay him a dollar myself and he’ll never care who it came from, just THANK YOU for letting me enter this doe!

Then I e-mail the MD Dept of Agriculture and requested registration information on becoming a flock tester ASAP. We will NOT have this problem next year, I’m going to do it myself!

Sushi for dinner (no, I didn’t make it, who has that kind of time?) and say bye to Daddy (who was headed to worship team practice at church), then the kids and I head north to nearly the PA line. We are meeting a farmer who advertised having a steer going to slaughter on Craigslist and 1/2 to 1/4 of a cow for sale. I’ve already got a local pork farmer who I buy half a hog from yearly, so this process isn’t foreign to me, but I need to lay eyes on his land, his animals, and him before I make any promises. You gotta be sure he’s not just some guy living in a condo, wearing skinny jeans and Ugg boots, and scamming people for money online. Farmers never wear hipster clothes, tip off number one!

The farmer meets me at the bottom of the lane, and directs us over to a couple of Jersey (dairy cow) steers (bulls that are castrated)that he has been raising on 7 acres of pasture. For 3 animals, they have it made in the shade with all those lush green plants and grass. We chit-chat a while, check out the market ready steer and his 2 new calves, then decided to head on up to the house to review the paperwork.

As I head to my van, Manchild looks at me, looks to the farmer, and declares he wants to ride on the tractor to the house. Our farmer doesn’t hesitate a beat before agreeing to this manly request, settling Manchild on his lap and proceeding to lead us up the lane. Halfway there he puts his arms out to the sides, indicating that Manchild is now DRIVING the tractor, and doing a darn fine job of it!

Girlchild and I are now left to follow this stranger, who tenderly has my son, up this long gravel lane to the house. I allow Girlchild to sit in the passenger seat instead of her booster- it was the least I could do.

We go through paperwork, settle on a plan, and then I am handed a plastic bag full of 3lbs of frozed ground beef and 2 very large steaks. A parting gift, vacuum sealed by the local butcher, intended to seal the deal. It works. Between the beautiful scenery of winding through green country at dusk, a farmer grandpa letting my 5 year old son drive his tractor, and enough red meat to feed us for a week (for free!), our day has settled to a gentle ending. 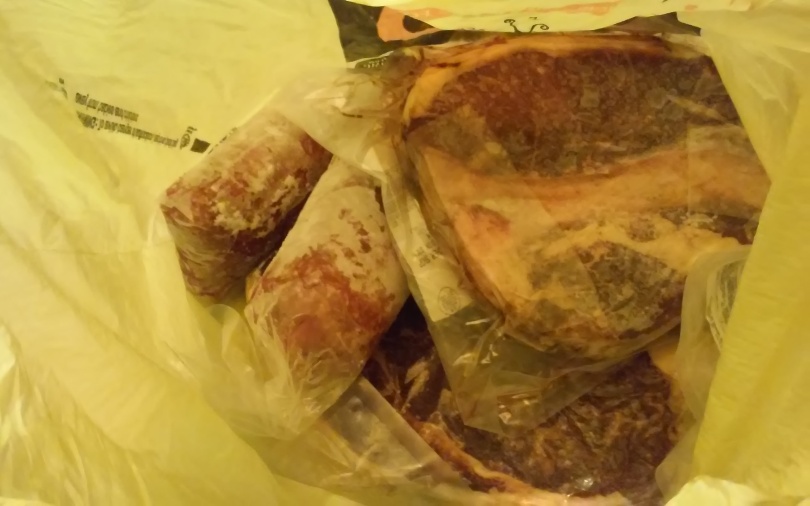 As the kids lay re-dosed in their own rooms now, I am now surprised at how easily we all (mostly me) adjusted to the loss of plans to show our beloved yard birds. I am grateful for the kindness of strangers, and I am happy to have learned that my kids are now old enough to wash my van windows at the local gas station during our pit stop on the way home. They were TERRIBLE at it, never once using the squeegee part, but I didn’t care. Just watching them try was entertainment enough. A sweet ending to an all-over-the-map kind of a day, with not enough coffee in the world to make it feel right. But God fixed it up quite nicely in the end. Bonus tidbit, my   ‘Save A Farm, Eat Local” car decal should be arriving in the mail tomorrow! Woot-WOOT! 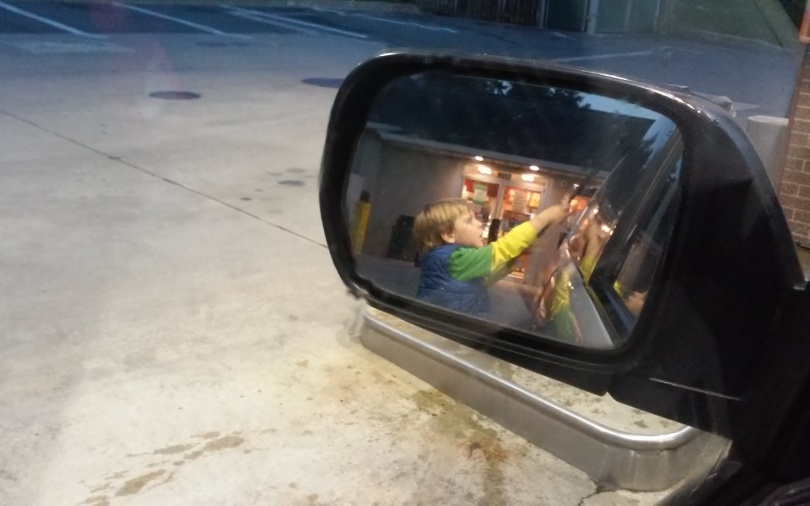