The thing about eBay,  is that you can spent hours on there looking at incredibly cheap items you never knew you needed.  And whatever you pick, will probably run you about eighty cents, American currency. So when I stumbled upon a toilet seat handle, for less than a buck, I knew it would be the answer to Girlchild’s complaints.

See, recently there was a re-distribution of bodies to bedrooms in our household, and as the chips fell, Captain Schenanigans and I are no longer sharing a bathroom with the children, they are essentially on their own. Which translates into a very responsible 7yr old girl sharing a toilet with a often reckless 5 yr old boy who will do ANYTHING to avoid touching things that may force him to wash his hands afterwards. With Mama no longer in the mix, this leaves Girlchild having to put the toilet seat down way more than before, and her complaints have not fallen on deaf ears. 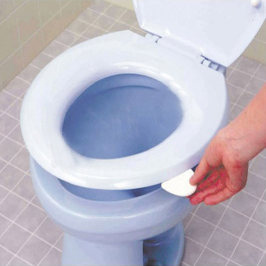 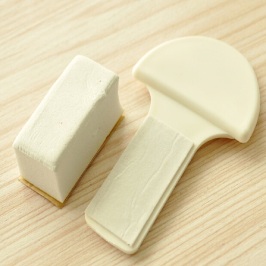 Granted, by the time this little slice of heaven arrived off it’s slow boat from China, I had already forgotten I’d ordered it. But none the less I was delighted to see it in the mail. I had told Captain Schenanigans about them, and laid the package out neatly to be installed correctly by my Beloved. Bear in mind, the ENTIRE package was written in Chinese, not a speck of English on it, and Captain likes things done correctly. It’s basically plastic with an adhesive backing, but you never know, these things might get complicated

So after about 2 weeks of moving the package to various locations around the kitchen, it became clear to me that this was not a priority to my husband (in his defence, he was building a pretty stellar tree house in that time), so I was going to have to do this install job solo. Girlchild came around and curiously investigated the package upon it’s arrival, but somehow the miracle of this device was never communicated to Manchild. Both kids were sleeping when I installed it at 10pm, and I figured they’d come pummel me with questions when they found it in the morning.

At 3:50am this morning, a small but mighty little boy came thumping into our bedroom. “Mom! Dad! There was something stuck to the toilet when I got up to go potty. I tried and tried, and I finally got it off, but then it fell into the potty. So I reached in with my hand and pulled it out, but now I don’t know what to do with it?” Manchild explained as he hold out his dripping wet hand and uncurls his little fingers from around the never-been-used lid lifter.

As if Synchronized Parenting were a sport, Captain Schenanigans and I both respond in unison “Wash your hands!” Manchild questions where to put the handle, and at this hour of the morning I suggest the trash. Captain began to offer that he could re-attach it but I will happily pay eighty-one cents to avoid this conversation at 4am, so I put the kibosh on that suggestion and rolled over.

The situation ended with one happily washed and snuggled Kindergartener sandwiched in our bed, and me laying awake for an HOUR, unable to fall back asleep while pondering if this was funny enough to post on social media (after talking with a fellow nurse this morning at work, turns out, it was).

So that is how an eight-one cent plastic object from China, that I ordered on August 3rd, and installed at 10pm last night, lasted a whopping 6 hours before being totally decimated by a finally potty trained boy-  who had not been properly briefed on it’s purpose. I never saw that one coming. Guess some little boys are territorial.

Welp, the good thing is that he was totally onboard with the plans for the tree house every step of the way. Well briefed and informed, it looks like that’s going to get to stay standing. Permission granted.

One thought on “Failure to Communicate”