First, let me start by saying we adopted a new girl bunny today. I stinkin’ LOVE HER!!! She is a year old, came free from a woman in DC, and her name is Annie. She’ll be a breeding mama for our meat program, and she’s gorgeous. Best part is, she’s FOURTEEN POUNDS!! Poor Annie was stuck in a cage and over fed for too long. She took up half her cage with her bulk. She was tricky to lift, and believing that her parents are Dutch and Harlequin rabbits, she should be about 8-9lbs! Annie is right now outside in 1/5 of our yard with tons of space to “run around”. Poor Annie can’t run. But she can hop about 3-4 times in a row. That’s about it. She’s going to get a lot of recess time, all day, everyday, till she builds her muscles up and looses some bulk. She’s a girl after my own heart.

The other thing that has me all happy about today is that not only did I get a new doe, but my kids are spending a few hours visiting Grandma and Grandpa, so my husband and I can get a few chores scratched off our “To Do” list. Like finish insulating the attic. Woot! Woot!

While deep in my heart I do not trust ladders, I watched Captain Schenanigans fearlessly climb up the ladder in our connected garage and disappear into an access hole in the attic. Taking a deep breath, I slowly, cautiously, joined him. Kneeling on the beams to avoid falling through the ceiling, I carefully crawled over to where he was unrolling the fiberglass insulation. We were having a hard time loving the previous owners, at that moment. They had left rolls of insulation, in the wrong size, just laying around beside a half-done job. I could have kicked them.

But then my cat walked by. Yes. My cat. He had joined us in the attic. “Jax? How did you get up here? ” I questioned him.

“He climbed the ladder” Captain grunted while face deep in insulation under a respirator. I was just tickled pink that my smart cat knew how to climb a ladder, AND wanted to be with us that much! I snapped a picture of the yellow tabby free ranging the attic, and sent it to the grandparents to show the kids. I knew they’d be just as fascinated as I was.

Looking around the attic, I could see light coming in from the edges, and was surprised to learn that several places under the eaves only have a little screen between the inside of the attic and the outside of the house. Not much protection there from creepy crawlies, if you ask me.

So we continue, I mostly run errands on the ground level now, Captain finds problems without quick solutions, and Jax circles the hole around the ladder a few times looking sad. We forget about the cat and focus on the task at hand (well, Captain Schenanigans does, I’m too busy texting every 4-H volunteer I know, surveying them for thoughts on Annie’s breed. That’s how I came to determine her parentage in the first paragraph). We forget about the cat. Until we heard the meowing.

Turns out, I wasn’t the only one to see the light. Jax had managed to wedge his furry little ferret shaped body down into the mesh and was peering out into the yard, crying. Due to the slope of the roof, and the shingle nails sticking out through the whole attic roof, he was unable to get himself back out. While I found this hilarious and incredible, my husband found one more thing to make him dislike this day. Poor Captain. 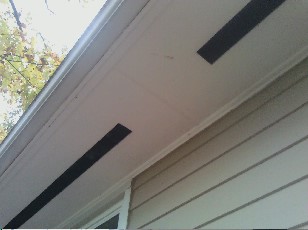 So I got the can of cat food, cracked it open, and tried to lure the cat to the ladder. No dice, he really was stuck. Next, I stood outside under the eaves, and held the cat food can up towards the roof and was ordered to keep the cat in one place. Done. His little yellow face pressed against the mesh separating him from the backyard was pitiful and loud. He wanted OUT!

Captain was frustrated, not even knowing how to get to where the cat was, until he spotted a duct to the outside at the far end of the house. Using the cat food as bait, and my happy-kitty-voice, I lured Jax to the far side of the house as Captain Schenanigans stood on a ladder, unscrewed the brackets holing the duct in place, widened the mesh, and fit his bear paw inside to grab the stranded kitty. Being the agreeable, eager to please  cat that he is, Jax braced his feet, resisted Captain with all his might, and popped out of his break away collar. Crying the whole time because he was stuck!

Now Captain was annoyed! I suggested that if Jax refused our physical help, how about a more passive approach. Lay a board across the ladder and give him something to land on, after he works himself through the hole in the mesh. “Hand me that picnic table” I was told for the first time ever in my life. So I did. 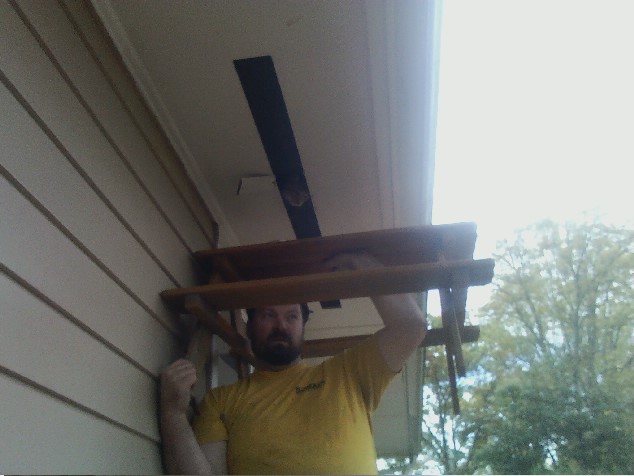 Standing on the ladder, holding up the picnic table, placing the cat food on the table Captain provided the perfect kitty escape route. Jax (peering through the hole in the picture above)  jumped out of the hole in the house, on to the table, knocked the cat food off the table (hitting the house and spraying the siding and Captain), before launching himself into the backyard. Complaining the whole time. He wasn’t happy that half his cat food was gone when I handed him the can either. But I didn’t force him to lick the rest off my house siding. That just would have been rude. 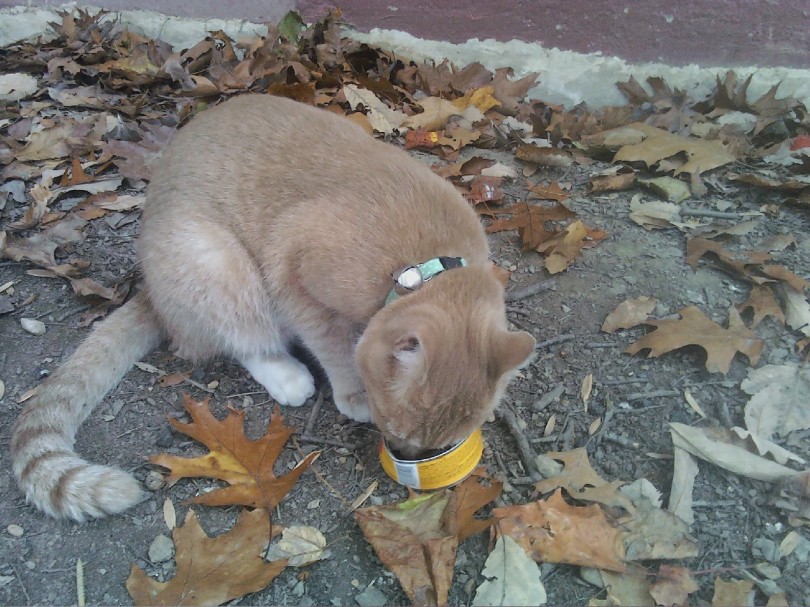 So now we’re back to a regular Saturday afternoon, sans trapped kitty (thus avoiding a new smell to the attic). I am back to folding laundry ,and Captain has run to Home Depot to get the correct stuff we need. Whatever that may be. I’ve said it before and I’ll say it again, I married well. Because if I lived alone and got my cat trapped in my rafters/eaves, who would I call? It’s not Animal Control’s problem. It’s not a 911 emergency. It’s not even a Fire Dept situation. But it’s the the stuff I rely on the ever resourceful Captain Schenanigans to handle while I snap picture for my blog and laugh my fiberglass covered butt off! What a trooper 🙂

2 thoughts on “The Things We Do For Love”