This week, I have been getting text messages from my cat’s friend’s. Dead serious. He has no cat friends (’cause he’s a jerk),  but the human ones he has in spades! People I do not know and have never met are texting me and calling to share their about their relationships with my socially promiscuous feline. Why now? Because this is the first week they’ve had access to my phone number.

It all started on Monday with a phone call. Someone had picked up my un-collared kitty and taken him to the SPCA as a charitable act of good will towards orphaned animals. Problem was, this cat has a home, and a massive social network, and he just can’t seem to keep his collar on!

At the SPCA I explained how my very friendly, uber popular tabby had gone through so many collars that we’d given up. The last one he lost was green. Then a few days later he come home wearing a BLUE one, I have no idea where that came from. But I figured surely everyone in the neighborhood knew he was ours by now, right? Especially if they’re helping him with costume changes and what not. Except for one thoughtful soul who was pet sitting in the neighborhood, and was approached by our fearless and chatty cat, who no doubt allowed himself to be lifted up and taken home like a giant dummy. Now I get to bail his yellow tail out of the clink downtown in the middle of a work day. Where they had re-named him, “Lil’ Sebastian”.

That’s not the first time this cat has been re-named. He came to us as Jax, but his medical paperwork prior to the rescue listed him as Mr. Mustard. And when I first met my neighbor down the street, she had pictures of Jax in her phone and was referring to her routine patio visitor as him as Mr. Wiggles. This cat gets around! 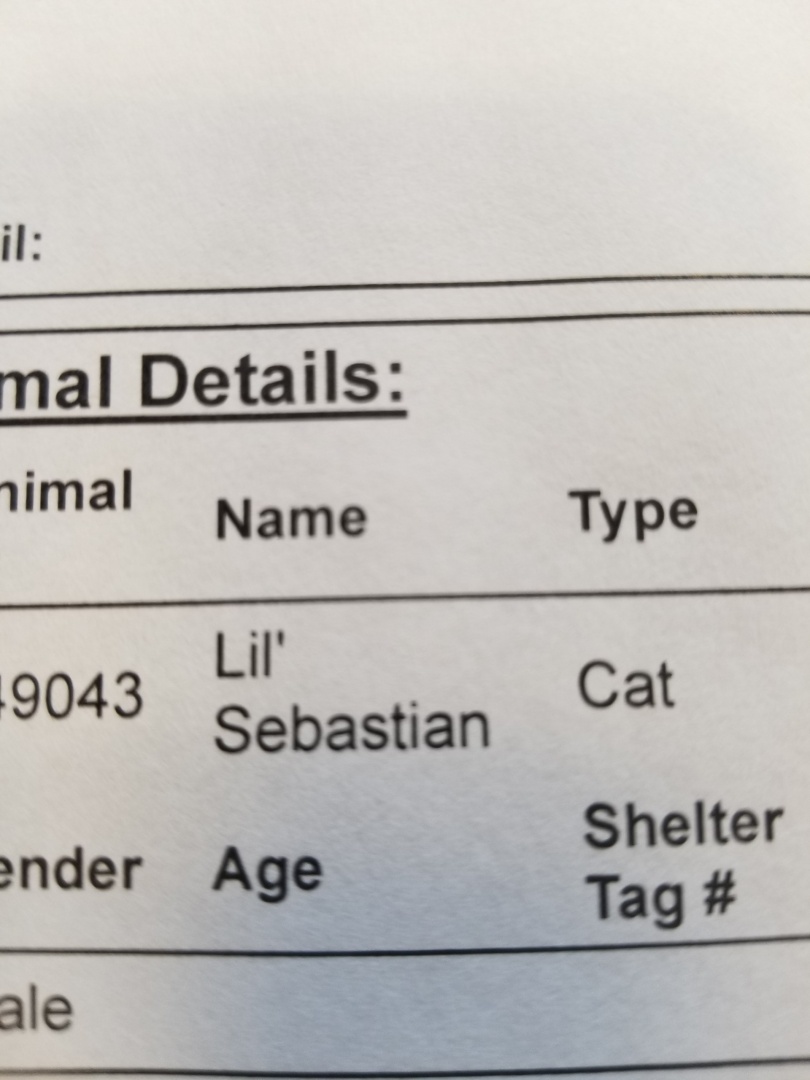 At the SPCA, I was given a tag for his new collar that read “JAX, indoor/outdoor cat”, and listed my name and phone number. The very next day, after wrestling him into his new collar and bright shiny tag, I get a phone call. It’s from a woman a few streets over who I vaguely recalled meeting about 3 years ago, with a couple of kids. She informed me that she had Jax at her house, and asks if he is supposed to be out and about. I assured her that he was. That he’s most likely hunting rodents and visiting his fan club, but that he is still within bounds. Thank you for the welfare check, though! 🙂

Two days go by, and today I get this text message.

It was very sweet. I responded with a little bit of Jax’s back story of being adopted out from a rescue as a barn cat who would never make a good pet, and tell her about his recent trip to the SPCA which earned him shiny new ID tags and a sparkly blue collar. I encouraged her to enjoy Jax, and love him up as much as she wanted.

Last year Captain Schenanigans and I met a couple while walking our dog who, upon petting Grover and learning where we lived, asked me “Oh, is this Jax’s dog?” After that conversation, I had a sneaking suspicion my yellow boy was being fed at another location. He’d gained weight, and the vet didn’t want him to get any bigger. I had assumed it was this couple, but on the off chance there were more handouts being given, I took a shot…

Yep, I was right. So we are not Jax’s only family. While he manages to make curfew at our house every night, and was inside enough this winter not to bother with growing a winter coat, I always suspected this kitty had relationships on the side. And I was glad for it! He really does brighten people’s lives. My neighbor who shows cats tells me that Jax has the personality the judges would love. I believe it.

Another neighbor who walks a black lab stops in our yard every day so Lincoln can sniff and visit Jax during their walks. Jax acts like he’s only tolerating Lincoln, but I noticed he’s not running away from the attention! Lincoln’s mom sent me this pic a few weeks back, and I love it!

It’s funny how my pets have their own relationships. Lincoln is actually Grover’s BFF. They love each other! It’s also incredibly First World that I am even managing my pet’s relationships. Who does this? But God made Jax with the gift of socializing, and as he trots on as the Schenanigans Family Ambassador, I’m sure there will be more texts and phone calls in the future. I look forward to it. I’m a huge believer in community and knowing, really knowing, your neighbors. If it takes my cat for me to meet the families two streets away, bring it! The more we network together, the better off and safer everyone is.

One thought on “Fan Club Manager”